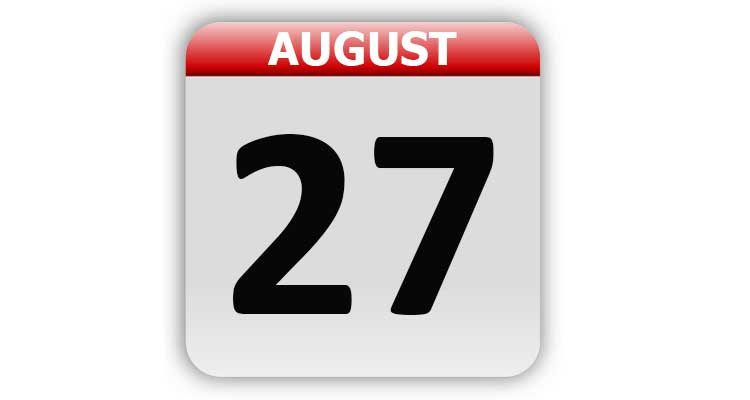 1856 – An obscure lawyer spoke at a Republican Party rally at Bronson Park in Kalamazoo, MI. That lawyer was Abraham Lincoln — his only visit to Michigan.

1859 – Petroleum was discovered near Titusville, PA. that led to the world’s first commercially successful oil well.

1889 – The patent for the metal clarinet was given to Charles G. Conn.

1894 – The Wilson-Gorman Tariff Act was passed by Congress. The provision within the Act for a graduated income tax was later struck down by the Supreme Court.

1921 – The owner of Acme Packing Company bought a pro football team for Green Bay, WI. J.E. Clair named the team the Green Bay Packers to pay tribute to those who worked in his plant.

1946 – Isle Royale, off Michigan’s Upper Peninsula, was dedicated as a National Park.

1962 – The Mariner 2 unmanned space mission was launched by NASA towards Venus. It flew by Venus in December to become the first space probe to reach the vicinity of another planet.

1981 – Work began on recovering a safe from the luxury liner Andrea Doria. The liner sank in 1956 in the waters off of Massachusetts.

1984 – President Ronald Reagan announced that the first citizen to go into space would be a teacher. Christa McAuliffe was the teacher who was chosen. She died in the Challenger disaster on January 28, 1986.

1985 – The Space Shuttle Discovery left for a seven-day mission in which three satellites were launched and another was repaired and redeployed.

1989 – The first U.S. commercial satellite rocket was launched. A British communications satellite was onboard.

1990 – Stevie Ray Vaughan and three members of Eric Clapton’s band were killed in a helicopter crash in Wisconsin.

1998 – TV’s “Gilligan’s Island” star Bob Denver was given six months of unsupervised probation after pleading no contest to charges of marijuana possession.

1998 – James Brolin received a star on the Hollywood Walk of Fame.

1998 – The movie “Titanic” became the first film to earn more than $600 million in North America.

1999 – Due to financial reasons, Russia was forced to abandon the Space Station Mir. The final crew departed the station to return to Earth.

2001 – Work began on the future site of a World War II memorial on the U.S. Capital’s historic national Mall. The site is between the Washington Monument and the Lincoln Memorial.

2006 – Comair Flight 5191 crashed on takeoff from Blue Grass Airport in Lexington, KY, bound for Hartsfield-Jackson Atlanta International Airport in Atlanta, GA. Of the passengers and crew, 49 of 50 were confirmed dead in the hours following the crash.

2014 – The movie “Birdman” premiered in theaters. It would win the Academy Award for Best Picture.

2017 – Boxer Floyd Mayweather stopped Conor McGregor by a 10th round TKO to win his final fight before retiring. Mayweather’s career record was 50-0.

The Duchess Who Wasn’t Day

Tags: A Look Back, August 27, Celebrity Birthdays, Days of the Year, Today in History