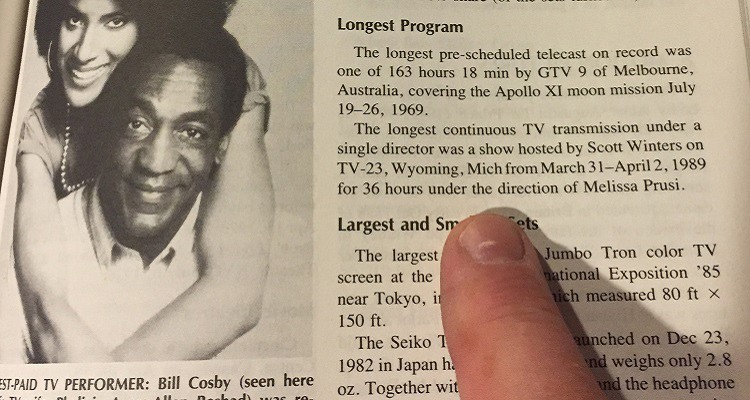 Who Knew a World Record Could Be So Easy?

Many, many, many years ago, I decided I wanted to somehow establish a world record. I wanted to be in the Guinness Book of World Records. Just how was I going to accomplish this feat? I certainly wasn’t going to be the person to eat the most worms, grow the longest beard, run the fastest, or lift the most weight. There had to be a way.

Late in 1988, I was sitting in a fundraising meeting at the Wyoming Community Television Center. They were in the process of getting a new remote vehicle and needed to find a way to raise some funds for equipment in the new truck.

I’m not sure if I was the one that came up with the idea or not — but at some point during that meeting, the idea of doing the “Longest Continuous Television Show” (with one host and one director) came to be. The current record at that time was 28 hours. Was I willing to try to break the record? You betcha! And so the planning began.

Starting at noon on Friday, March 31st, 1989 (my birthday!) we started out to shatter that World Record! I hosted the program and it was directed by Melissa Prusi. (One of these days I’ll have to locate the publicity pictures from that event. You won’t believe the permed hair I had!)

At a minute after midnight on Sunday, April 2nd, 1989, we had officially established a new record at 36 hours of continuous television. (The record then had to be verified by Guinness).

After a few months of waiting… sure enough we received official word that our record would be in the 1990 edition of “The Guinness Book of World Records”. We also received a nice document certifying our record. And when the book hit the stores, I was first in line to get my copy. Look! There was my name on page 147. I was sharing a page with Bill Cosby (back then it was an honor to share a page with him!). Someone broke the record the following year by going 40 hours.

Where am I going with this story? Well this week I happened to stumble across a video of a dog who likes to pop balloons. I had a German Shepherd growing up that would try to play with balloons. Of course when she tried to bite the inflated latex spheres they would pop — but that was not her original intention.

Now there is a little Jack Russell terrier named “Twinkie” who broke the Guinness World Record for balloon popping! She did this by bursting 100 balloons in 39 seconds. “Twinkie” actually took the record away from her mother (who held the record from 2005 until 2015).

Here is the video…

After watching the video it dawned on me:  It would have been so much easier to train a dog to do something like popping balloons — instead of try to stay awake and do live television for 36 hours! But then again my talent at dog training isn’t so great either. Scooby could sit and shake. Moose knows how to “high five” and that’s about it.

I guess one record will have to be enough for me. I don’t see attempting to break any world records in my future!