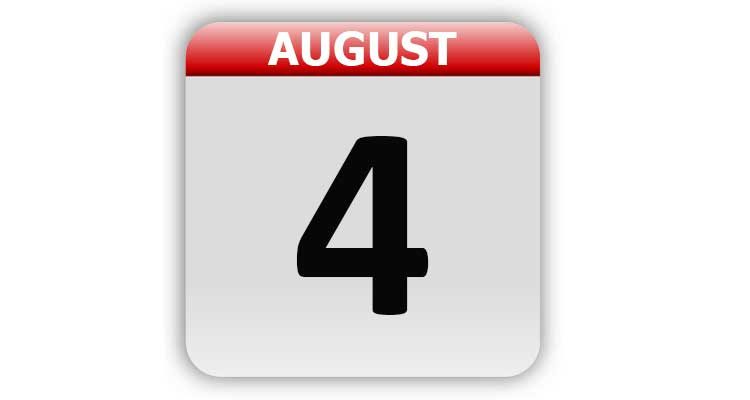 1693 – This date is traditionally given for Dom Perignon’s invention of champagne. It is not clear whether he actually invented champagne, but he has been credited as an innovator who developed the techniques used to perfect sparkling wine.

1790 – The Revenue Cutter Service was formed. This was the beginning of the U.S. Coast Guard.

1814 – The United States attacked Mackinac Island, which was held by the British. The U.S. was not successful and did not regain the island and fort until the War of 1812 ended in 1815.

1821 – “The Saturday Evening Post” was published for the first time as a weekly newspaper.

1877 – The first telephone in Michigan was demonstrated. It was owned by a Grand Rapids, MI plaster company whose president was a close personal friend of Alexander Graham Bell.

1892 – The father and stepmother of Lizzie Borden were found murdered in their Fall River, MA, home.

1944 – Nazi police raided a house in Amsterdam and arrested eight people. Anne Frank, who was a teenager at the time, was one of the people arrested. After her death, her diary would be published.

1966 – A ban of the broadcast of any and all Beatles records on most U.S. radio stations went into effect. The ban was in response to John Lennon making the statement that the Beatles were now more popular than Jesus Christ.

1972 – Arthur Bremer was found guilty of shooting George Wallace, the governor of Alabama. Bremer was sentenced to 63 years in prison.

1983 – New York Yankee outfielder Dave Winfield threw a baseball during warm-ups and accidentally killed a seagull. After the game, Toronto police arrested him for “causing unnecessary suffering to an animal.”

1987 – The Federal Communications Commission rescinded the Fairness Doctrine which had required radio and television stations to present controversial issues “fairly”.

1991 – The Oceanos, a Greek luxury liner, sank off of South Africa’s southeast coast. All of the 402 passengers and 179 crew members survived.

2002 – “The Anna Nicole Show” had the highest-rated series premiere in basic cable history.

2007 – NASA’s Phoenix spacecraft was launched on a space exploration mission of Mars. The Phoenix landed on Mars on May 25, 2008 and operated until November 2, 2008.

2015 – Grand Rapids, MI elected its first woman mayor. Rosalynn Bliss was elected as the city’s 59th mayor just one day after her 40th birthday. She received two-thirds of the vote in the city’s mayoral primary election.

Tags: A Look Back, August 4, Celebrity Birthdays, Days of the Year, Today in History