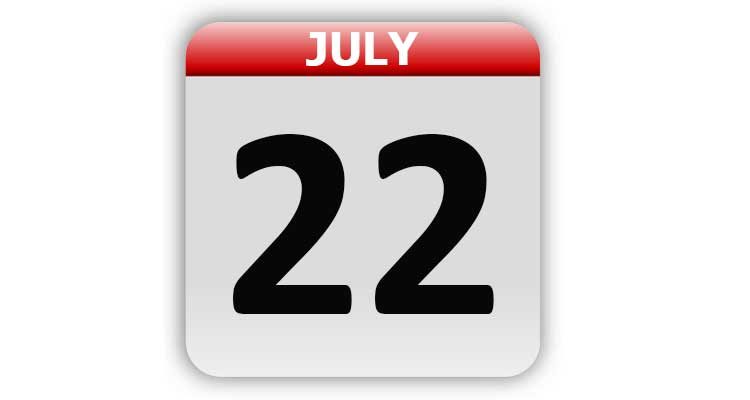 1376 – The date that the legend of the Pied Piper of Hamelin leading rats out of town is said to have occurred.

1796 – Surveyors of the Connecticut Land Company named an area in Ohio “Cleveland” after Gen. Moses Cleaveland, the superintendent of the surveying party.

1893 – Katharine Lee Bates wrote “America the Beautiful” after admiring the view from the top of Pikes Peak near Colorado Springs, CO.

1926 – Babe Ruth caught a baseball at Mitchell Field in New York, NY. The ball had been dropped from an airplane flying at 250 feet above the ball park.

1934 – Outside of the Biograph Theater in Chicago, IL, “Public Enemy No. 1” John Dillinger was mortally wounded by FBI agents.

1941 – Plans for the Pentagon were presented to the House Subcommittee on Appropriations.

1942 – The U.S. government began compulsory civilian gasoline rationing due to the wartime demands.

1962 – The Mariner 1 spacecraft flew erratically several minutes after launch and had to be destroyed.

1991 – Serial killer and cannibal Jeffrey Dahmer was arrested in Milwaukee, WI after police discovered human remains in his apartment.

2000 – Astronomers at the University of Arizona announced that they had found a 17th moon orbiting Jupiter.

2003 – Sadaam Hussein’s sons Uday and Qusay Hussein were killed by U.S. troops inside a Mosul palace.

2003 – The movie “Seabiscuit”, starring Toby Maquire, was released in theaters.

2003 – U.S. Army Private Jessica Lynch, a prisoner of war who was rescued from an Iraqi hospital, received a hero’s welcome when the 19 year old returned to her hometown of Palestine, WV. She had been captured by Iraqi forces in March of 2003.

2003 – In Paris, France, a fire broke out near the top of the Eiffel Tower. About 4,000 visitors were evacuated. No injuries were reported.

2005 – The movie “March of the Penguins” premiered in theaters.

2009 – The longest total solar eclipse of the 21st century, lasting up to 6 minutes and 38.8 seconds, occurred over parts of Asia and the Pacific Ocean.

2013 – Prince George, the first child of Prince William and Kate Middleton, was born.

Tags: A Look Back, Celebrity Birthdays, Days of the Year, July 22, Today in History