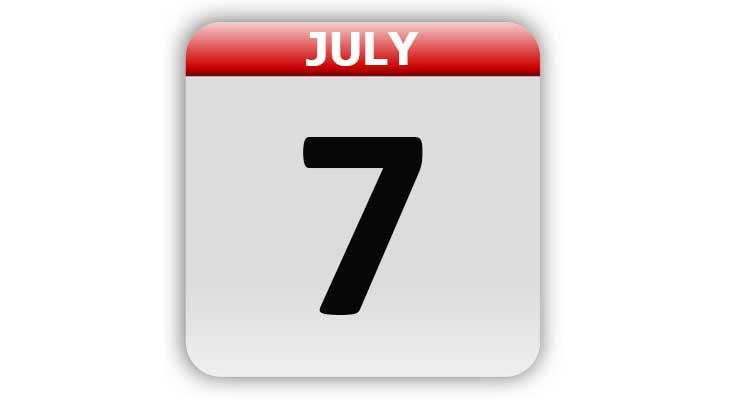 1862 – The first railroad post office was tested on the Hannibal and St. Joseph Railroad in Missouri.

1920 – For the first time a device known as a radio compass was used on a U.S. Navy airplane near Norfolk, VA.

1928 – Sliced bread was sold for the very first time at the Chillicothe Baking Co. in Chillicothe, MO.

1947 – A supposed crash of an alien spaceship happened near Roswell, New Mexico.

1954 – A disc-jockey at a radio station (WHBQ) in Memphis, TN, by the name of Dewey Phillips, became the first D.J. to play an Elvis Presley record.

1967 – The Monkees kicked off a national tour. The opening act was Jimi Hendrix.

1994 – Amazon.com, Inc. was founded in Seattle, WA. It was originally called “Cadabra.”

2000 – Amazon.com announced that they had sold almost 400,000 copies of J.K. Rowling’s “Harry Potter and The Goblet of Fire”. That made it the biggest selling book in e-tailing history.

2007 – Live Earth concerts took place on all seven continents. The purpose of the concerts was to bring awareness to the problem of global warming.

2007 – J.K. Rowling’s “Harry Potter and the Deathly Hallows” is published.

2009 – A memorial service was held for Michael Jackson at the Staples Center in Los Angeles, CA. 17,500 people were admitted in to the event. The service was viewed, on TV and online, by over a billion people throughout the world

2011 – Rodrick Dantzler went on a shooting spree in Grand Rapids, MI. He killed seven people, including two children. After leading police on a chase and a standoff, he eventually shot and killed himself. It was the worst mass murder in Grand Rapids’ history.

Doc Severinsen – 95 years old (1927) – Bandleader (Bandleader on “The Tonight Show”. His trumpet is also featured in the opening of the “CBS News Sunday Morning” program.)

Jessica Hahn – 63 years old (1959) – American model and actress who is best known for a rape allegation against televangelist Jim Bakker while she was employed by him as a church secretary.