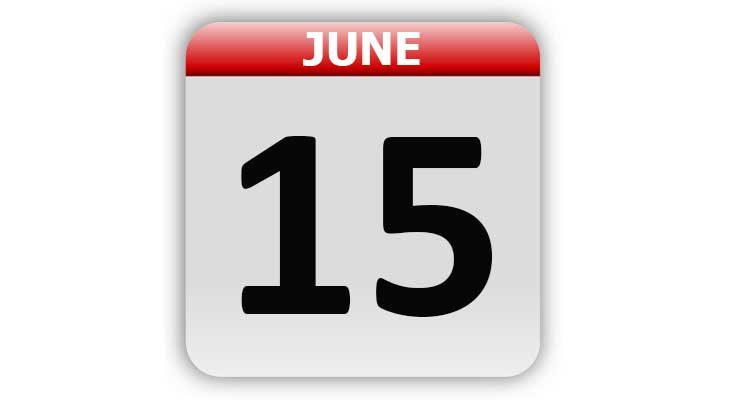 1667 – Jean-Baptiste Denys administered the first fully-documented human blood transfusion. He successfully transfused the blood of a sheep to a 15-year old boy.

1752 – Benjamin Franklin experimented by flying a kite during a thunderstorm. The result was a little spark that showed the relationship between lightning and electricity (traditional date, the exact day is unknown).

1775 – George Washington was appointed head of the Continental Army by the Second Continental Congress.

1836 – Congress suggested a way to end the Ohio-Michigan “Toledo Strip” border dispute. The idea, which was adopted, gave the Toledo area to Ohio and the vast Upper Peninsula to Michigan.

1844 – Charles Goodyear was granted a patent for vulcanization, the process that strengthens rubber.

1878 – Eadweard Muybridge took a series of photographs to prove that all four feet of a horse leave the ground when it runs. The study became the basis of motion pictures.

1898 – The U.S. House of Representatives approved the annexation of Hawaii.

1911 – The Computing-Tabulating-Recording Co. was incorporated in the state of New York. The company was later renamed International Business Machines (IBM) Corp.

1916 – President Woodrow Wilson signed a bill incorporating the Boy Scouts of America, making them the only American youth organization with a federal charter.

1952 – The Diary of Anne Frank, a true account of Jews hiding from the Nazis, was published.

1958 – Pizza Hut was founded by two college students, brothers Dan and Frank Carney, in Wichita, KS. Today Pizza Hut is the world’s largest pizza chain with 18,703 restaurants worldwide as of 2019.

1970 – Charles Manson went on trial for the Sharon Tate murders.

1983 – In Grand Rapids, MI, the Grand Plaza West was officially completed. The building is a 29-story glass enclosed tower with 287 suites and guest rooms. Total cost of renovation was $68 million.

1985 – Rembrandt’s painting Danaë was attacked by a man (later judged insane) who threw sulfuric acid on the canvas and cut it twice with a knife.

1992 – It was ruled by the U.S. Supreme Court that the government could kidnap criminal suspects from foreign countries for prosecution.

1992 – Vice President Dan Quayle instructed a student to spell “potato” with an “e” on the end during a spelling bee.

1994 – The animated movie “The Lion King” premiered in theaters.

1995 – O.J. Simpson found the glove didn’t fit, which eventually lead the jury to acquit him.

2022 – Microsoft retired the web browser Internet Explorer. It had been around since 1995.

Tags: A Look Back, Celebrity Birthdays, Days of the Year, June 15, Today in History