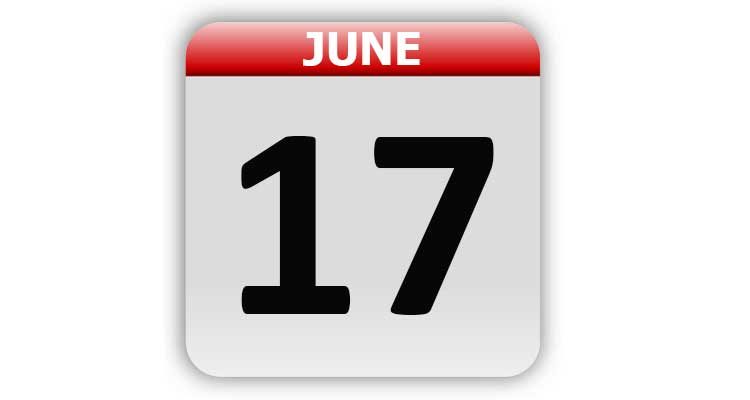 1837 – Charles Goodyear received his first patent. The patent was for a process that made rubber easier to work with.

1872 – George M. Hoover began selling whiskey in Dodge City, KS. It had been a dry town up until this point.

1876 – Under the leadership of Crazy Horse, General George Crook’s command was attacked and defeated on the Rosebud River by 1,500 Sioux and Cheyenne Indians.

1879 – Thomas Edison received an honorary degree of Doctor of Philosophy from the trustees of Rutgers College in New Brunswick, NJ.

1885 – The Statue of Liberty arrived in New York, NY aboard the French ship Isere.

1901 – The College Board introduced it’s first standardized test, the forerunner to the SAT.

1928 – Amelia Earhart began the flight that made her the first woman to successfully fly across the Atlantic Ocean.

1930 – The Smoot-Hawley Tariff Bill became law. It placed the highest tariff on imports to the U.S.

1941 – WNBT-TV in New York City, NY, was granted the first construction permit to operate a commercial TV station in the U.S.

1942 – “Yank”, a weekly magazine for the U.S. armed services, began publication. The term “G.I. Joe” was first used in a comic strip by Dave Breger.

1963 – The Supreme Court ruled 8-1 in Abington School District v. Schempp that no locality may require recitation of the Lord’s Prayer or Bible verses in public schools.

1972 – Five White House operatives were arrested inside Democratic Party headquarters at the Watergate building in Washington DC. It was an attempt by some members of the Republican party to illegally wiretap the opposition.

1987 – With the death of the last individual of the species, the Dusky Seaside Sparrow became extinct.

1994 – After a low speed police pursuit, O.J. Simpson was arrested for the murders of his ex-wife Nicole Brown Simpson and her friend Ronald Goldman.

2002 – Terry Barton, an employee of the Forest Service, was charged with setting the largest wildfire in Colorado history.

2005 – Oprah Winfrey was named the most powerful person in showbiz by “Forbes” magazine.

2007 – Nearly a decade after a civil jury ordered O.J. Simpson to pay more than $33 million for the wrongful deaths of Nicole Simpson and Ron Goldman, a judge handed the rights to “If I Did It”, Simpson’s aborted book about the murders, to the Goldman family.

2021 – The Juneteenth National Independence Day, was signed into law by President Joe Biden. It would become the first federal holiday established since Martin Luther King Jr. Day in 1983.

Tags: A Look Back, Celebrity Birthdays, Days of the Year, June 17, Today in History