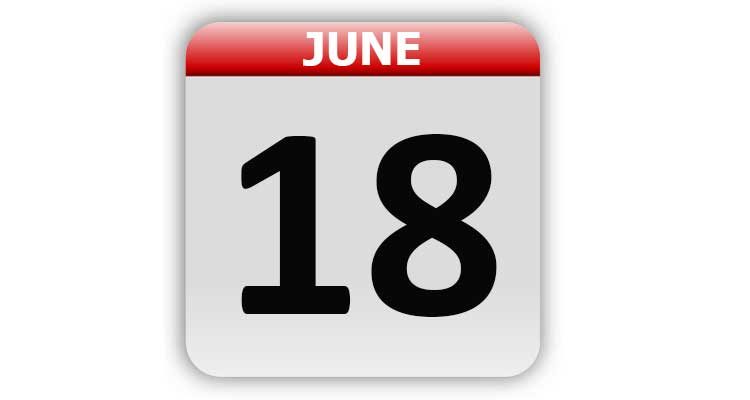 1621 – The first duel in America took place in the Plymouth Colony in Massachusetts.

1812 – The War of 1812 began as the U.S. declared war against Great Britain. The conflict began over trade restrictions.

1855 – The Steamship Illinois became the first ship to pass through the Sault Ste. Marie Locks.

1863 – J.J. Richardson received a patent for the ratchet wrench.

1925 – The first degree in landscape architecture was granted by Harvard University.

1928 – Amelia Earhart became the first woman to fly (but not solo) across the Atlantic Ocean as she completed a flight from Newfoundland to Wales. She was a passenger. Wilmer Stultz was the pilot and Lou Gordon was the mechanic.

1936 – The first bicycle traffic court was established in Racine, WI.

1940 – The “Finest Hour” speech was delivered by Winston Churchill.

1953 – Seventeen major league baseball records were tied or broken in a game between the Boston Red Sox and the Detroit Tigers.

1956 – The comedy team of Dean Martin and Jerry Lewis announced they had broken up.

1959 – The first telecast received from England was broadcast in the U.S. over NBC-TV.

1975 – Fred Lynn of the Boston Red Sox hit three home runs, a triple and a single in a game against the Detroit Tigers.

1982 – The Senate approved the renewal of the 1965 Voting Rights Act for an additional twenty-five years.

1996 – Ted Kaczynski, suspected of being the Unabomber, was indicted on 10 criminal counts.

1998 – Nine commemorative U.S. postage stamps were re-issued. The stamps were considered to be classically beautiful examples of stamp engraving.

1998 – “The Boston Globe” asked Patricia Smith to resign after she admitted to inventing people and quotes in four of her recent columns.

2009 – NASA launched the Lunar Reconnaissance Orbiter/LCROSS probes to the Moon. It was the first American lunar mission since Lunar Prospector in 1998.

National Wanna Get Away Day

Tags: A Look Back, Celebrity Birthdays, Days of the Year, June 18, Today in History