Good Bye to Uncle Ben, No Grand Rapids Fireworks, Guess Who Was Featured in Grand Rapids Magazine Daily’s Picture This?

I can almost feel the weekend it’s getting so close. I’m ready. Just have to keep cool and hang on a few more days. Here are Thursday’s “Random Thoughts”…

Yesterday, we got word that Quaker Foods was removing Aunt Jemima from their line of breakfast items. They noted that her character was “based on a racial stereotype” and that it was time to just move on and rename the brand.

I asked in yesterday’s “Random Thoughts” if Uncle Ben was next… And apparently yes he is!

Mars, the parent company of Uncle Ben’s Rice said yesterday that “now was the right time to evolve” the brand, but did not release details of what exactly would change or when. Read more about announcement here.

Uncle Ben’s was founded by Erich Huzenlaub and Gordon Harwell. The name “Uncle Ben’s” began being used in the 40s, referring to a Texas farmer, known for his rice, who was called “Uncle Ben”.

Over the years, both companies had updated their logos and brands to modernize them. Neither of these people were slaves. They were just two individuals who were honored because of their skills of cooking or growing rice. How is this offensive? I would think people would be honored to have people of their race featured on a brand of something — but apparently not.

So, is it just wrong to use anyone who is black in any branding or imaging anymore? What happens to Famous Amos. Is his name the next to be yanked off his cookies? Or, should we just avoid using names for any branding, regardless of their race? No more Chef Boyardee. No more Betty Crocker, Duncan Hines gone. No more Gordon’s Fisherman, Get rid of Colonel Sanders and his Kentucky Fried Chicken. No more Ben and Jerry’s. So long Jimmy Dean. You won’t find Marie Callender’s name on pot pies anymore. Even Orville Redenbacher’s name would be yanked from his popcorn. And don’t even think of trying to buy any bologna with Oscar Mayer’s name on it. Sara Lee pies would also be history. Maybe it ever extends to cartoon character names… get rid of Cap’n Crunch and Snap, Crackle & Pop. The list goes on and on. Don’t forget that recently Land O Lakes removed the Indian from their packaging as well.

Does this foolishness advance so far that we can’t have any spokespeople for any items anymore? Do we have to worry that someone is going to be offended by the race or background of the spokesperson?

I’m visualizing a world of generic items and black and white boxes. Do you remember the days of “unbranded” or “generic” items at the grocery store? Everything came in a white box with nothing but black print on the carton? No pictures, no logos, no colored ink. Just black and white.

Is that where this world is heading? I don’t think I can even begin to be that politically correct about everything. 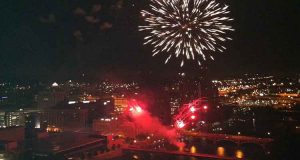 I’ve heard a few people give the summer of 2020 the nickname the “summer of nothing”.

Now it looks like the fireworks displays for the 4th of July have just about all been cancelled.

Previously we heard that communities like Kentwood, Wyoming, East Grand Rapids, Grandville, and Grand Haven had pulled the plug on their events due to the coronavirus.

Yesterday the city of Grand Rapids cancelled their fireworks display.

In the official statement, organizers said: “Ultimately, the community’s safety is our number one priority. Acceptable social distancing measures would be difficult, if not impossible to maintain between those in attendance,” said Russ Hines, CEO of Riverbank Events and Media. “In addition, the costs to add the PPE equipment, police and fire personnel that would be needed make this financially challenging for all parties.”

So now you will just have to wait until next year for the Grand Rapids fireworks. They already have the date set. it will be Saturday, July 3, 2021.

WOOD TV-8 has compiled a list of all the events that have been cancelled this summer.

I have enjoyed reading Grand Rapids Magazine for many years.

They recently introduced a new daily email newsletter called Grand Rapids Magazine Daily. It is their curated e-newsletter highlighting the best food, drinks, experiences and more in Grand Rapids. Of course I signed up immediately for a little daily dose of their magazine.

Lately they have been including a photo at the end of that email newsletter called “Picture This”. Yesterday they included my picture… 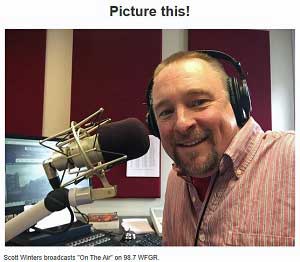 You can sign up for Grand Rapids Magazine Daily too. Just fill in the information on the right side of their webpage.

Thank You Grand Rapids Magazine! And keep up the good work.

It is going to be a great day for a picnic, maybe a little warm, but get out there and enjoy the weather.

On this date in 1948, Columbia Records publicly unveiled its new long-playing phonograph record, the 33-1/3 rpm, in New York City.

I still have over 1,000 albums. It’s been awhile since I’ve dusted off my turntable and played any of them — but I need to do that again soon.

Find out what else has happened on June 18th.