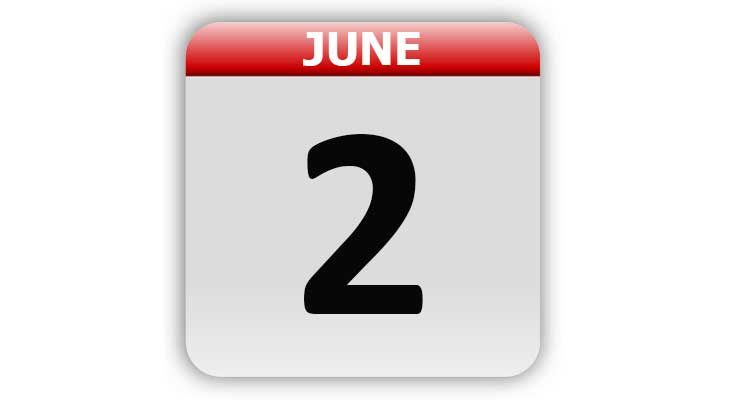 1763 – In what is now Mackinaw City, MI, Chippewa Indians arranged to celebrate the birthday of King George III with an exhibition game of Lacrosse in front of the gates of Ft. Michilimackinac. When the Brits opened the gates to watch, the Indians rushed the fort and massacred all but 4 Englishmen.

1774 – The Quartering Act, which required American colonists to allow British soldiers into their houses, was reenacted.

1835 – The Great Seal of Michigan was adopted. It was designed by Lewis Cass, Michigan’s second (non-acting) Territorial governor. The seal was patterned after the seal of the Hudson Bay Fur Company.

1835 – P.T. Barnum launched his first traveling show. The main attraction was Joice Heth. Heth was reputed to be the 161-year-old nurse of George Washington.

1883 – The first baseball game under electric lights was played in Fort Wayne, IN.

1886 – Grover Cleveland became the second U.S. President to get married while in office. He was the first to have a wedding in the White House.

1924 – All American Indians were granted U.S. citizenship by Congress.

1928 – Velveeta Cheese was introduced. The product was advertised as a nutritious health food.

1933 – President Franklin D. Roosevelt accepted the first swimming pool to be built inside the White House.

1935 – George Herman “Babe” Ruth announced that he was retiring from baseball.

1964 – The Rolling Stones kicked off their first American tour at a high school football stadium in Lynn, Massachusetts.

1966 – Surveyor 1, the U.S. space probe, landed in Oceanus Procellarum on the moon and started sending photographs back to Earth of the Moon’s surface. It was the first soft landing on another planet.

1985 – The R.J. Reynolds Company proposed a major merger with Nabisco that would create a $4.9 billion conglomerate.

1997 – In Denver, CO, Timothy McVeigh was convicted on 15 counts of murder and conspiracy for his role in the 1995 bombing of the Alfred P. Murrah Federal Building in Oklahoma City, OK, where 168 people died. He was executed four years later.

2003 – In the U.S., federal regulators voted to allow companies to buy more television stations and newspaper-broadcasting combinations in the same city. The previous ownership restrictions had not been altered since 1975.

2003 – The Supreme Court ruled that companies could not be sued under a trademark law for using information in the public domain without giving credit to the originator. The case had originated with 20th Century Fox against suing Dastar Corp. over their use of World War II footage.

Tags: A Look Back, Celebrity Birthdays, Days of the Year, June 2, Today in History