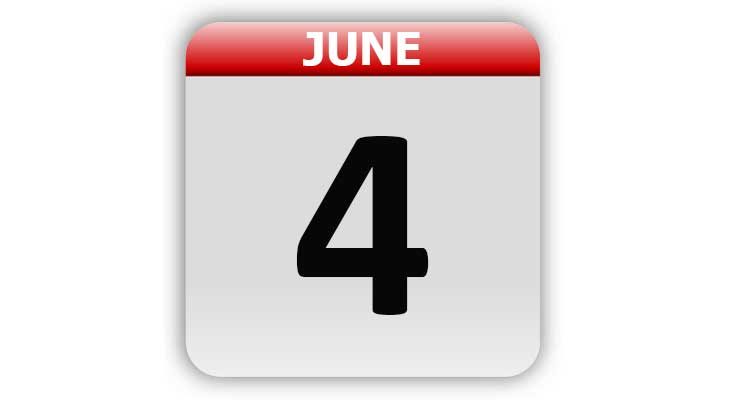 1783 – A hot-air balloon was demonstrated by Joseph and Jacques Montgolfier. It reached a height of 1,500 feet.

1784 – Marie Thible became the first woman to fly in a hot-air balloon. The flight was 45 minutes long and reached a height of 8,500 feet.

1812 – The Louisiana Territory had its name changed to the Missouri Territory.

1816 – “The Washington” was launched at Wheeling, WV. It was the first stately, double-decker steamboat.

1876 – The “Transcontinental Express” train arrived in San Francisco, CA, via the First Transcontinental Railroad only 83 hours and 39 minutes after leaving New York, NY.

1892 – The Sierra Club was incorporated in San Francisco, CA.

1896 – Henry Ford made a successful test drive of his new car in Detroit, MI. He called the vehicle a “Quadricycle.”

1910 – A statue of George Armstrong Custer was dedicated in Monroe, MI. The famous general spent much of his life in Monroe.

1912 – Massachusetts became the first state to set a minimum wage.

1924 – An eternal light was dedicated at Madison Square in New York City in memory of all New York soldiers who died in World War I.

1931 – The first rocket-glider flight was made by William Swan in Atlantic City, NJ.

1935 – “Invisible” glass was patented by Gerald Brown and Edward Pollard.

1937 – The first shopping cart was introduced by Sylvan Goldman, owner of the Humpty Dumpty supermarket chain in Oklahoma. It was actually a modified folding chair on wheels.

1947 – The House of Representatives approved the Taft-Hartley Act. The legislation allowed the President of the United States to intervene in labor disputes.

1974 – The Cleveland Indians had to forfeit a game to the Texas Rangers when fans got out of control on “10 Cent Beer Night”.

1974 – Sally Murphy became the first woman to qualify as an aviator with the U.S. Army.

1977 – The Apple II computer went on sale for the first time.

1984 – Bruce Springsteen released his “Born in the U.S.A.” album. It spent seven weeks at #1 on the Billboard charts and yielded seven Top 10 singles.

1984 – For the first time in 32 years, Arnold Palmer failed to make the cut for the U.S. Open golf tournament.

1985 – The Supreme Court upheld a lower court ruling striking down an Alabama law that provided for a daily minute of silence in public schools.

1986 – The California Supreme Court approved a law that limited the liability of manufacturers and other wealthy defendants. It was known as the “deep pockets law.”

1992 – The U.S. Postal Service announced that the “young Elvis” stamp beat out the older “Vegas Elvis” stamp in a contest in which more than a million votes were tallied.

1998 – Actor Bob Denver, the star of TV’s “Gilligan’s Island”, was busted for marijuana possession in West Virginia after receiving pot in the mail.

1998 – Terry Nichols was sentenced to life in prison for his role in the Oklahoma City bombing.

1998 – George and Ira Gershwin got a posthumous star on the Hollywood Walk of Fame.

2003 – Martha Stewart was indicted for conspiracy, obstruction of justice and securities fraud from the December 2001 sale of shares in ImClone Systems.

2003 – Amazon.com announced that it had received more than 1 million orders for the book “Harry Potter and the Order of the Phoenix.” The released date was planned for June 21.

2008 – The United Kingdom and Canada became the first countries to be able to buy and rent films at the iTunes Store.

2008 – Johnny Carson’s sidekick Ed McMahon began a fight to avoid foreclosure on his Beverly Hills estate after falling $644,000 behind in mortgage payments.

2008 – Jim Carrey and Jenny McCarthy led thousands of people in a march on Washington, D.C. to bring awareness to the impact that vaccines may have on autism.

2018 – In an effort to promote their hamburgers, IHOP changed their name temporarily to IHOB.

Tags: A Look Back, Celebrity Birthdays, Days of the Year, June 4, Today in History