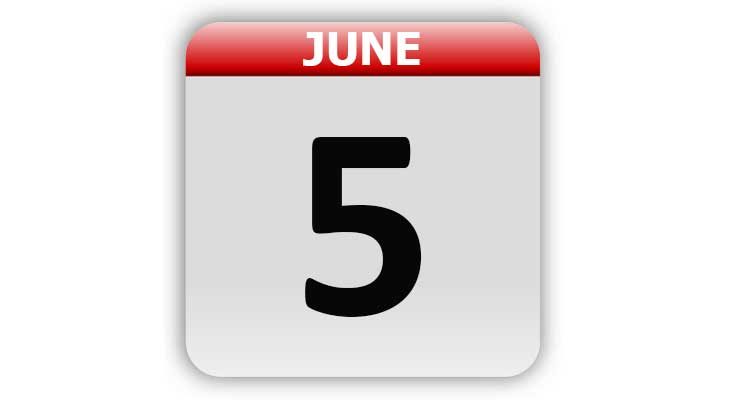 1794 – Congress prohibited citizens from serving in any foreign armed forces.

1817 – The first Great Lakes steamer, the Frontenac, was launched.

1917 – American men began registering for the World War I draft.

1933 – President Roosevelt signed the bill that took the U.S. off of the gold standard, nullifying the right of creditors to demand payment in gold.

1946 – The first medical sponges were first offered for sale in Detroit, MI.

1968 – Robert F. Kennedy, a Presidential candidate, was shot at the Ambassador Hotel in Los Angeles, CA, by Sirhan Sirhan, a Palestinian. Kennedy died the next day.

1981 – In the U.S., the Center for Disease Control and Prevention reported that five men in Los Angeles were suffering from a rare pneumonia found in patients with weakened immune systems. They were the first recognized cases of what later became known as AIDS.

1987 – Ted Koppel and guests discussed the topic of AIDS for four hours on ABC-TV’s “Nightline”.

1987 – The movie “Harry and the Hendersons”, about a Seattle family’s encounter with Bigfoot, opened in theaters in the United States. It would later become a TV show which ran from 1991-1993.

1995 – The dating show “Singled Out” aired on MTV for the first time. Each episode featured a group of 50 men and a group of 50 women competing for a date with one main contestant of the opposite sex. The original hosts were Chris Hardwick and Jenny McCarthy. When McCarthy left the show in early 1997 to star in her own sitcom, “Jenny”, MTV hired Carmen Electra to replace her for the last season and a half. The show ended in 1998

1998 – A strike began at a General Motors Corp. parts factory in Flint, MI, that closed five other assembly plants and idled workers across the U.S. for seven weeks.

1998 – The movie “The Truman Show”, starring Jim Carrey, opened in theaters in the United States.

2001 – Amazon.com announced that it would begin selling personal computers later in the year.

2002 – The Space Shuttle Endeavor was launched. The Shuttle would deliver a new crew to the International Space Station Alpha and bring the old space station crew back to Earth.

2004 – Ronald Reagan, the 40th President of the United States, died at age 93. He had long suffered from Alzheimer’s disease.

International Day for the Fight Against Illegal, Unreported and Unregulated Fishing

Tags: A Look Back, Celebrity Birthdays, Days of the Year, June 5, Today in History