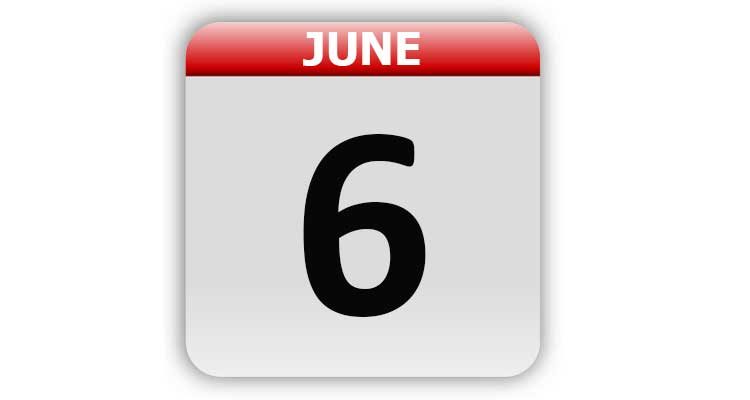 1833 – Andrew Jackson became the first President to ride in a train. It was a B&O passenger train.

1844 – The Young Men’s Christian Association (YMCA) was founded in London.

1904 – The National Tuberculosis Association was formed in Atlantic City, NJ.

1932 – The first federal tax on gasoline in the U.S. went into effect. It was a penny per gallon.

1933 – In Camden, NJ, the first drive-in movie theater opened. They were originally referred to as “park-in theaters”. Here is a blog about Drive-ins in the Grand Rapids, MI area.

1942 – The first nylon parachute jump was made by Adeline Gray in Hartford, CT.

1944 – The D-Day invasion of Europe took place on the beaches of Normandy, France. 400,000 Allied American, British and Canadian troops were involved.

1944 – The first glider to land airborne troops in the Normandy invasion landed. It was made by Gibson Refrigerator Co. of Greenville, MI and paid for by the war bond sales of Greenville school children.

1946 – The Basketball Association of America was formed in New York City, NY, with eleven teams.

1968 – Senator Robert F. Kennedy died at 1:44 am in Los Angeles after being shot by Sirhan Sirhan. Kennedy was was shot the evening before while campaigning for the Democratic presidential nomination.

1971 – “The Ed Sullivan Show” aired for the last time. It was canceled after 23 years on the air. Gladys Knight and the Pips were the musical guests on show.

1984 – Tetris, one of the best selling video games of all time, was released.

1985 – The Senate authorized non-military aid to the Contras. The vote authorized $38 million over two years.

2001 – A Los Angeles, CA jury awarded more than $3 billion in damages from the Philip Morris tobacco company to a man who claimed he had smoked Marlboros for 40 years.

2001 – Timothy J. McVeigh, the Oklahoma City bomber, was executed by lethal injection in an Indiana federal prison for the deaths of 168 people on April 19th, 1995.

2005 – The United States Supreme Court ruled that federal authorities could prosecute sick people who smoke marijuana on doctor’s orders in the case of Gonzales v. Raich. The ruling concluded that state medical marijuana laws did not protect uses from the federal ban on the drug.

Tags: A Look Back, Celebrity Birthdays, Days of the Year, June 6, Today in History