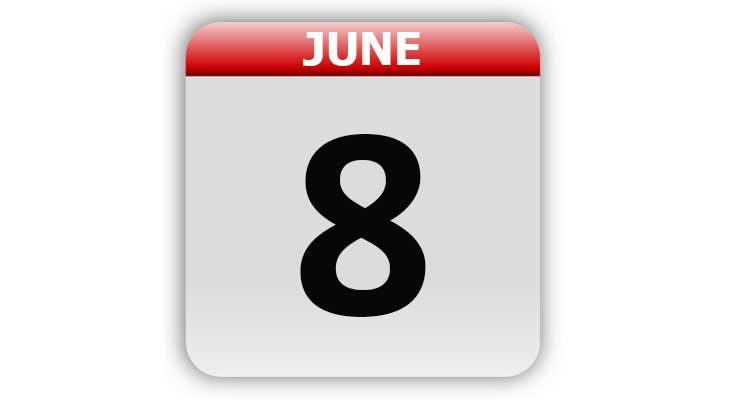 1789 – James Madison introduced 12 proposed amendments to the U.S. Constitution in the House of Representatives. By 1791, 10 of them were ratified by the state legislatures and became the Bill of Rights. Another was eventually ratified in 1992 to become the 27th Amendment.

1861 – Tennessee voted to secede from the Union and joined the Confederacy.

1872 – The penny postcard was authorized by Congress.

1906 – Theodore Roosevelt signed the Antiquities Act into law, authorizing the President to restrict the use of certain parcels of public land with historical or conservation value.

1915 – Secretary of State William Jennings Bryan resigned in a disagreement over handling of the sinking of the Lusitania.

1934 – The Cincinnati Reds became the first Major League team to use an airplane to travel from one city to another. They flew from Cincinnati, OH to Chicago, IL.

1953 – The Supreme Court ruled that restaurants in Washington, DC could not refuse to serve black patrons.

1965 – U.S. troops in South Vietnam were given orders to begin fighting offensively.

1969 – It was announced that there would be a single schedule for both the NFL and AFL.

1987 – Fawn Hill began testifying in the Iran-Contra hearings. She said that she had helped to shred some documents.

1988 – The judge in the Iran-Contra conspiracy case ruled that Oliver North, John Poindexter, Richard Secord and Albert Hakim had to be tried separately.

1991 – A victory parade was held in Washington, DC, to honor veterans of the Persian Gulf War.

1995 – U.S. Air Force pilot Captain Scott O’Grady was rescued by U.S. Marines after surviving alone in Bosnia after his F-16 fighter was shot down on June 2.

1998 – The Federal Trade Commission brought an antitrust complaint against Intel Corp., alleging its policies punished other developers of microprocessor chips.

2000 – The Dallas Stars and the New Jersey Devils played the NHL’s longest scoreless game in Stanley Cup finals history. The fifth game of the series lasted 106 minutes and 21 seconds. The game ended with a goal by Mike Madano that allowed the Stars to play a game six back in Dallas.

2000 – A federal judge ordered Microsoft to be split in two companies and imposed sweeping restrictions to stop antitrust abuses by the software giant. The Justice Department took the rare step of asking the Supreme Court to review the order.

2002 – The Lennox Lewis/Mike Tyson fight made its way into the record books as the highest grossing event in pay-per-view television history, raking in $103 million.

2004 – Nate Olive and Sarah Jones began the first known continuous hike of the 1,800-mile trail down the Pacific Coast. They completed the trek at the U.S.-Mexico border on September 28.

2005 – Macaulay Culkin pleaded guilty to two counts of drug possession in a court in Oklahoma City, OK, stemming from a September bust.

2007 – Kelly Allen Frank, who was arrested in 2005 for a scheme to kidnap David Letterman’s son and his nanny, escaped from Montana State Prison.

2007 – Paris Hilton was dragged from an Los Angeles, CA courtroom screaming, “Mom, mom, mom” and sent back to jail by Judge Michael Sauer. Paris would eventually serve a term of 23 days in prison.

Tags: A Look Back, Celebrity Birthdays, Days of the Year, June 8, Today in History