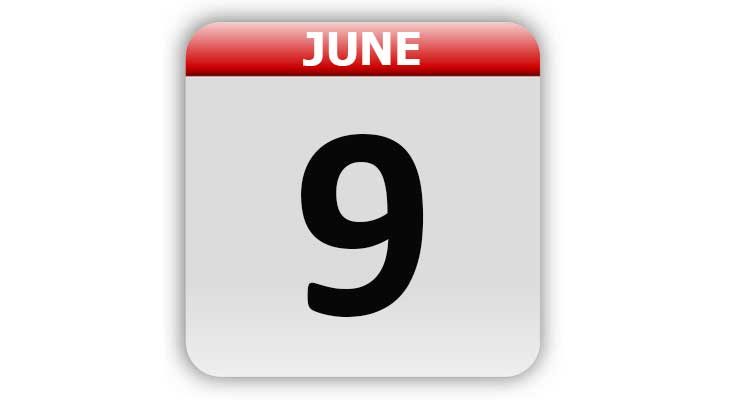 1790 – John Barry copyrighted “Philadelphia Spelling Book.” It was the first American book to be copyrighted.

1845 – St. Vincent’s, the first hospital in Michigan, opened in Detroit. It was housed in a log building by the Sister’s of Charity. It was later renamed St. Mary’s Hospital.

1881 – The State of Michigan turned over ownership of the Soo Locks and canal to the United States Government and made passage free to all vessels. Since the locks opened in 1855 until 1877, the state had collected a four cents toll (later reduced to 3 cents), except from United States government ships.

1934 – Donald Duck made his debut in the Silly Symphonies cartoon “The Wise Little Hen”.

1943 – The withholding tax on payrolls was authorized by Congress.

1980 – Comedian Richard Pryor was severely burned by an explosion while freebasing cocaine at his California home. He was hospitalized more than two months.

1985 – Thomas Sutherland, an American educator, was kidnapped in Lebanon. He was not released until November 1991.

1986 – The Rogers Commission released a report on the Challenger disaster. The report explained that the spacecraft blew up as a result of a failure in a solid rocket booster joint.

1994 – Lisa “Left-Eye” Lopes (TLC) set fire to her boyfriend’s house. Her boyfriend was Andre Rison of the Atlanta Falcons.

2000 – Canada and the United States signed a border security agreement. The agreement called for the establishment of a border-enforcement team.

2000 – The U.S. House of Representatives voted to repeal gift and estate taxes. The bill called for the taxes to be phased out over 10 years.

2011 – The world’s first artificial organ transplant was performed. It was an artificial windpipe coated with stem cells.

Tags: A Look Back, Celebrity Birthdays, Days of the Year, June 9, Today in History