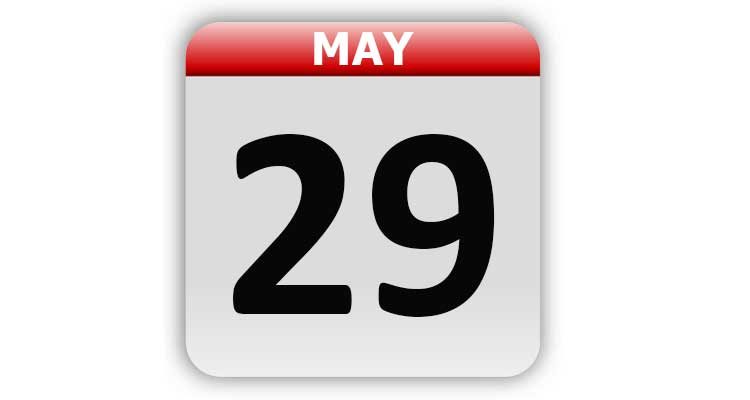 1721 – South Carolina was formally incorporated as a royal colony.

1790 – Rhode Island became the last of the original thirteen colonies to ratify the U.S. Constitution.

1848 – Former Michigan Governor and Senator Lewis Cass was nominated as candidate for U.S. President. He was defeated in the election by Zachary Taylor.

1848 – Wisconsin became the 30th state to join the United States.

1849 – A patent for lifting vessels was granted to Abraham Lincoln.

1886 – Pharmacist John Pemberton placed his first advertisement for Coca-Cola. The ad appeared in The Atlanta Journal.

1912 – Fifteen women were dismissed from their jobs at the Curtis Publishing Company in Philadelphia, PA, for dancing the Turkey Trot while on the job.

1916 – The official flag of the President of the United States was adopted.

1922 – The U.S. Supreme Court ruled that organized baseball was a sport, not subject to antitrust laws.

1951 – C.F. Blair became the first man to fly over the North Pole in single engine plane.

1962 – Buck (John) O’Neil became the first black coach in major league baseball when he accepted the job with the Chicago Cubs.

1977 – Janet Guthrie becomes the first woman to drive in the Indianapolis 500.

1985 – Thirty-nine people were killed and 400 were injured in a riot at a European Cup soccer match in Brussels, Belgium.

1986 – Colonel Oliver North told National Security Advisor William McFarlane that profits from weapons sold to Iran were being diverted to the Contras.

1988 – President Ronald Reagan began his first visit to the Soviet Union when he arrived in Moscow for a superpower summit with Soviet leader Mikhail Gorbachev.

1999 – The Space Shuttle Discovery completed the first docking with the International Space Station.

2001 – In a 7-2 decision, the Supreme Court ruled that Casey Martin, a golfer with a degenerative disease, has the legal right under the Americans with Disabilities Act to ride a golf cart during tournaments.

2003 – Scientists created a cloned mule named Idaho Gem from a cell from a mule fetus and a horse egg.

2006 – Kimberly Dozier, a CBS television correspondent covering the war in Iraq, was injured in a roadside bombing in Baghdad and hospitalized in critical condition.

2009 – The Pixar animated movie “Up” premiered in theaters.

2015 – The Obama administration removed Cuba from the U.S. terrorism blacklist. The two countries had severed diplomatic relations in January of 1961.

2015 – One World Observatory at One World Trade Center opened.

Put a Pillow on Your Fridge Day

Tags: A Look Back, Celebrity Birthdays, Days of the Year, May 29, Today in History