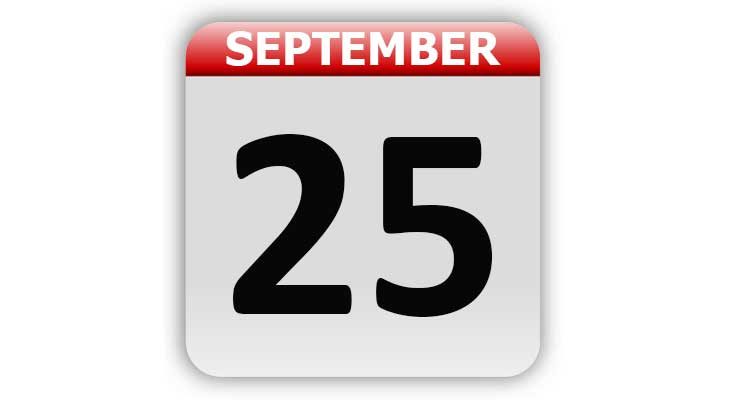 1789 – The first U.S. Congress adopted 12 amendments to the Constitution: the Congressional Apportionment Amendment (which was never ratified), the Congressional Compensation Amendment, and the last ten that are known as the Bill of Rights.

1882 – The first major league double header was played. It was between the Worcester and Providence teams.

1884 – The Little Traverse (Harbor Point) Lighthouse was turned on for the first time.

1919 – President Woodrow Wilson collapsed after a speech in Pueblo, CO. The speaking tour was in support of the Treaty of Versailles.

1926 – A group of Detroit businessmen purchased the Victoria, British Columbia, Cougars and moved them to the Motor City. The hockey team was first known as the Detroit Cougars and later became the Detroit Falcons. The team was renamed the Detroit Red Wings after they were purchased by James Norris is 1932.

1957 – 300 U.S. Army troops stood guard as nine black students were escorted to class at Central High School in Little Rock, AR. The children had been forced to withdraw two days earlier because of unruly white mobs.

1965 – The half hour Saturday morning cartoon “The Beatles” premiered on ABC. The show ran until September 7, 1969.

1965 – Willie Mays, at the age of 34, became the oldest man to hit 50 home runs in a single season. He had also set the record for the youngest to hit 50 ten years earlier.

1970 – The first episode of “The Partridge Family”, starring Shirley Jones and David Cassidy, aired on ABC. The series ran until March 23, 1974.

1973 – The three crewmen of Skylab II landed in the Pacific Ocean after being on the U.S. space laboratory for 59 days.

1978 – Melissa Ludtke, a writer for “Sports Illustrated”, filed a suit in U.S. District Court. The result was that Major League Baseball could not bar female writers from the locker room after the game.

1981 – Sandra Day O’Connor became the first female justice of the U.S. Supreme Court when she was sworn in as the 102nd justice. She had been nominated the previous July by President Ronald Reagan.

1992 – In Orlando, FL, a judge ruled in favor of 12-year-old Gregory Kingsley who had sought a divorce from his biological parents.

1992 – NASA launched the Mars Observer, a $511 million probe to Mars, it was the first U.S. mission to the planet in 17 years. The probe has not been heard from since it reached Mars in August of 1993.

1995 – Ross Perot announced that he would form the Independence Party.

1995 – In Grand Rapids, MI, the “Rick, Darla & Scott” morning radio show, with Rick Beckett, Darla Jaye, and Scott Winters, debuted on 97.9 WGRD. They were previously on 94.5 WKLQ as “The Q-Morning Zoo”. Read more about their move.

1997 – NBC sportscaster Marv Albert agreed to a plea bargain in his back-biting trail of a lover. He pleaded guilty to assault and battery. He was fired from NBC within hours.

2001 – Michael Jordan announced that he would return to the NBA as a player for the Washington Wizards. Jordan became the president of basketball operations for the team on January 19, 2000.

2018 – Bill Cosby was sentenced to 3-10 years in prison for aggravated sexual assault.

Tags: A Look Back, Celebrity Birthdays, Days of the Year, September 25, Today in History