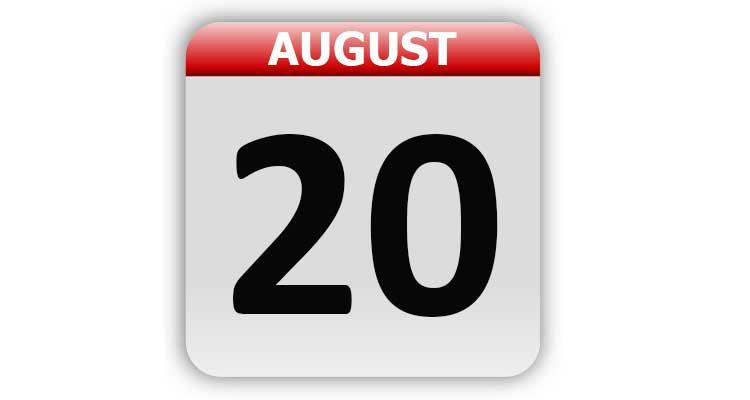 1858 – Charles Darwin first published his theory of evolution through natural selection in “The Journal of Proceedings of the Linnean Society of London”.

1866 – The National Labor Union in the U.S. recommended an eight-hour workday.

1866 – The formal declaration by President Andrew Johnson that the American Civil War was over. Fighting had stopped months earlier.

1920 – The first commercial radio station, 8MK (now WWJ), began operations in Detroit, MI. The radio station claimed they were the the first radio station in the world to broadcast regularly scheduled programs.

1923 – The first American dirigible, the “Shenandoah,” was launched in Lakehurst, NJ.

1938 – Lou Gehrig hit his 23rd career grand slam, a record that stood for 75 years until it was broken by Alex Rodriguez.

1939 – The National Bowling Association was founded in Detroit, MI.

1948 – The largest crowd to see a nighttime major league baseball game happened in Cleveland, OH. The Indians and Chicago’s White Sox played, at Municipal Stadium, in front of 78,382 people.

1967 – A noise reduction system for album and tape recordings was developed by technicians R. and D.W. Dolby. Checkmate Records became the first record label to use the new Dolby process.

1977 – NASA launched Voyager 2. The spacecraft was carrying a 12 inch copper phonograph record that contained greetings in dozens of languages, samples of music and sounds of nature.

1985 – The original Xerox 914 copier was presented to the Smithsonian Institute’s Museum of American History. The machine was invented by Chester Carlson.

1986 – In Edmond, OK, a postal employee, Patrick Sherrill, gunned down 14 of his co-workers and then committed suicide.

1989 – In Los Angeles, CA, entertainment executive Jose Menendez and his wife, Kitty, were shot to death by their sons, Lyle and Erik.

1996 – Carlos Santana received a star on the Hollywood Walk of Fame.

Tags: A Look Back, August 20, Celebrity Deaths, Days of the Year, Today in History