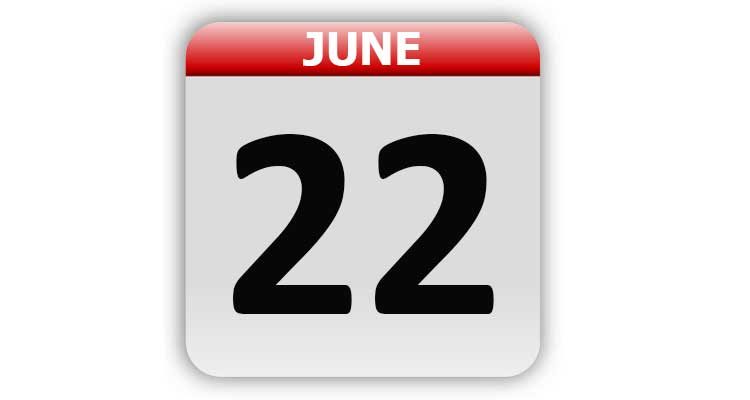 1870 – Congress created the Department of Justice.

1937 – Joe Louis won the title of world heavyweight champion boxer. He would hold the title for a record-setting 12 years.

1942 – The Pledge of Allegiance was formally adopted by the U.S. Congress.

1944 – President Franklin Roosevelt signed into law the Servicemen’s Readjustment Act, commonly known as the “GI Bill of Rights”, to provide broad benefits for veterans of the war.

1946 – Jet airplanes were used to transport mail for the first time.

1964 – The U.S. Supreme Court voted that Henry Miller’s book, “Tropic of Cancer”, could not be banned.

1969 – The Cuyahoga River in Cleveland, OH, caught fire, drawing national attention to water pollution, and spurring the passing of the Clean Water Act and the creation of the Environmental Protection Agency.

1970 – President Richard Nixon signed the 26th Amendment to the Constitution, lowering the voting age to 18.

1973 – Skylab astronauts splashed down safely in the Pacific after a record 28 days in space.

1978 – James W. Christy and Robert S. Harrington discovered the only known moon of Pluto. The moon is named Charon.

1988 – The movie “Who Framed Roger Rabbit” debuted in theaters.

1998 – The Supreme Court ruled that evidence illegally obtained by authorities could be used at revocation hearings for a convicted criminal’s parole.

1999 – Robert Downey Jr. was sentenced to six weeks in a rehab center for failing a routine drug test.

1999 – The Supreme Court ruled that persons with remediable handicaps cannot claim discrimination in employment under the Americans with Disability Act.

2001 – The movie “The Fast and the Furious” debuted in theaters.

2009 – Eastman Kodak Company announced that it would discontinue sales of the Kodachrome Color Film, ending it’s 74-year run as a photography icon.

Tags: A Look Back, Celebrity Birthdays, Days of the Year, June 22, Today in History