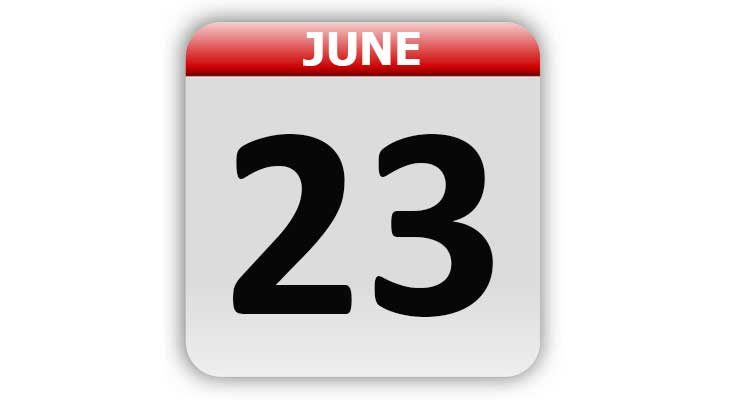 1836 – Congress approved the Deposit Act, which contained a provision for turning over surplus federal revenue to the states.

1868 – Christopher Latham Sholes received a patent for an invention that he called a “Type-Writer.”

1904 – The first American motorboat race got underway on the Hudson River in New York, NY.

1917 – In a game against the Washington Senators, Boston Red Sox pitcher Ernie Shore retired 26 batters in a row after replacing Babe Ruth. Ruth had been ejected for punching an umpire.

1926 – The College Board administers the first SAT exam.

1926 – The first lip reading tournament in America was held in Philadelphia, PA.

1931 – Wiley Post and Harold Gatty took off from Roosevelt Field in Long Island, NY on the first round-the-world flight in a single-engine plane.

1938 – The Civil Aeronautics Authority was established.

1950 – A furious squall on Lake Michigan caused the worst commercial aviation disaster at that time — Northwest Airlines Flight 2501 went down with 58 on board.

1960 – The U.S. Food and Drug Administration declared Enovid to be the first officially approved combined oral contraceptive pill in the world.

1963 – Jimmy Piersall, of the New York Mets, hit his 100th career home run and ran the bases backwards as promised.

1972 – President Richard Nixon and White House Chief of Staff H.R. Haldeman discussed a plan to use the CIA to obstruct the FBI’s Watergate investigation.

1989 – The movie “Batman”, directed by Tim Burton and starring Jack Nicholson as the Joker and Michael Keaton as Bruce Wayne/Batman, premiered in theaters.

1992 – Mob boss John Gotti, “The Teflon Don,” was sentenced to life in prison, where he died a decade later.

1993 – Lorena Bobbitt of Manassas, VA, cut off a part of her sleeping husband John’s penis with a kitchen knife. She drove off with the severed appendage and threw it from the car window. Police found it and a surgeon reattached it.

2005 – Roger Ebert received a star on the Hollywood Walk of Fame.

2013 – In Arizona, aerialist Nik Wallenda completed a quarter mile tightrope walk over the Little Colorado River Gorge, to become the first man to successfully walk across the Grand Canyon on a tight rope.

2015 – Verizon announced it had completed its $4.4 billion purchase of AOL, Inc.

Tags: A Look Back, Celebrity Birthdays, Days of the Year, June 23, Today in History